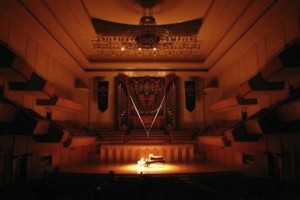 “for you” is a dreamlike experience. You feel like a chosen person. – Het Parool, 13 November 2003

The lucky listeners can now claim to have followed in the footsteps of Kin Ludwig of Bavaria, who liked to have music performed for his absolutely private enjoyment. – Toronto Star, 1 May 2004

for you is the title of the recital series in which the pianist performed for only single audience during fifteen minute-period. Except the fact that the performance time is short and that the targeted audience is not plural, the concert does not differ from ordinary concerts.
For instance, an audience comes to the concert hall holding a ticket stated at 4:20 pm, November 3, just as an appointment with your dentist. However, there was not single witness of the concert such as friends, family, critics and recording with whom you share the experience in that space.
There exist only music, a performer and a single audience. The audience instantly realizes that he is the only person who makes perception of hearing, sensing and experiencing the music there possible. Moreover the audience confronts with the fact that only he, who is sitting there, and the history of his inner experience, and the sensitivity he has been acquired, could complete the concert.
This is why the message, which has been sent out from the artist as “for you”, possibly becomes the tale of individual audience’s as “about you” and silently disengages from the music. In the closed space of the theatre, there are two people telling a story to each other without a document – that is _for you_. 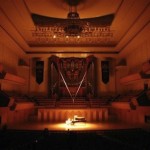 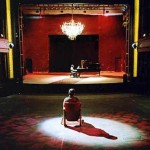 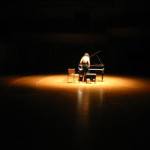