Serene and shocking at the same time. – De Volkskrant, March 2010

Mukaiyama breaks the border between a ‘closed’ artwork and the public’s gestures and leads us to a new experience. – The Daily Yomiuri, August 2009

wasted is an international art project that challenges the transience of the feminine virtue of fertility. wasted is an installation of 12.000 silk dresses, a piano concert with multi media and is reaching out to audiences to participate or engage in the process of this project through a ritual.
Tomoko Mukaiyama is always in contact with her audience during her piano recitals. She examines what happens to the energy during and after the time with her spectators and has used this research in the visual concept of her concert performances. With this project, she is not only communicating as a musician in a one-way direction, but exchanging as a human being and artist with her audience the basic emotions of fertility. In fact, she asks her audiences through the exhibitions and through internet to take part in the project by giving them a white silk dress for free on the condition they wear it and make a statement out of it.
Every exhibition of her project _wasted_ is opened with a multi media concert based on Bach’s monumental _Goldberg Variations_ and the artistic statements Tomoko receives from participants from all over the world. They have engaged in the project _wasted_ and sent their statements back in means of video, photos, texts, poetry, objects, paintings etc. These statements showed incredible sincere, open and intimate confessions.
The installation is a universe of 12.000 white silk dresses that has a spiritual value of a temple or a cathedral. The adventurous routing through the silk labyrinth embraces you and overwhelms with an incredible aesthetic power.

The wasted concert changes after each exhibition through the input by audiences. It presents fragments of the following compositions:
Johann Sebastian Bach, Goldberg Variationen
Tomoko Mukaiyama, improvisations
For the last exhibition there will be no concert. The last statements by women will be selected and presented in a final video.

Acclaimed and awared documentary maker Aliona van der Horst followed the project and made a film _Water Children_. The film premiered in Dutch cinemas with great success and has been nominated and won various awards. 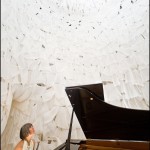 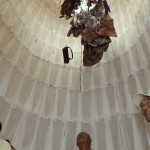 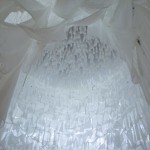 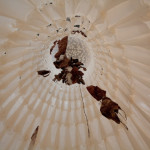 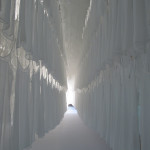 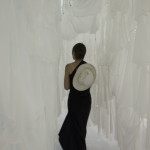