Amsterdam X Tokyo is the experiment on presenting a new space for the phenomenon – that is normally called – piano concert. When you enter the space, you will see a whitish atmosphere, with very strong lights and smoke. Between them there are countless red dots in the air. If you get closer you will see that they are goldfish.
The goldfish is a unique animal. In fact it is not a product of nature, biologically they have no function in life. So they are only made for the appreciation by human beings. It is a object made by human desire, even violent desire, which managed to manipulate biological existence. But isn’t this the same for a pianist who can exist only when her music is heard and she is seen in concert? The pianist is the metaphor of the goldfish in this concert. She will be also dressed in red. Some people say that this installation is very sexual, because the gold fish reminds them of pin-up girls. For other people it makes them think of their youth. Goldfish were the first pet for many children, and when the fish died, it was again the first death they experienced in their life.
Two centuries ago the goldfish was presented in Europe as an object of “Orientalism” and “Exoticism”. Needless to say we live in a time where the meaning of “Life and Death” is shifting to some other explanation than before. We also live in the world where exoticism does not exist any longer because our global network increased.
By this installation people will be confronted with the situation we live in, a transition-stage where new philosophy is coming by means of high technology. But at the same time we have to live with the old memories and everything else we have been experiencing with our senses. 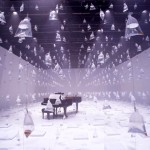 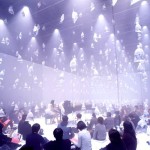 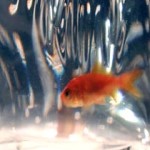 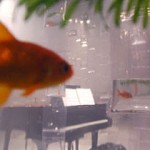 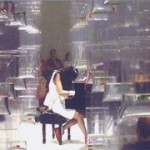